One of the most conspicuous features of Mary Shelley’s 1818 novel ‘Frankenstein; or, The Modern Prometheus‘ is a strikingly accurate portrait of a pathological narcissist as expressed by the novel’s protagonist, the science student Victor Frankenstein. Apart from

Victor Frankenstein only one other character appears as fully developed: An unnamed creature, born out of Victor Frankenstein’s grandiose fantasies, scientific skills and pursuit of divine power. All other characters appear as mere scenery on a stage where dichotomies of human nature contrast each other, and where the underlying question of whether or not the two main characters are shadow images of each other is ever present. By focusing on Victor Frankenstein and the creature, Mary Shelley succeeded in creating a novel that mirrors a personal story as well as many of the intellectual and aesthetic themes of the romantic era. It is obvious that Victor Frankenstein suffers from a mental disorder in the shape of pathological narcissism. Therefore, focusing on the disorder might be a useful prism for the understanding of the novel and its subsequent influence on popular culture. In this articleI will (1) find examples in the novel where Victor Frankenstein shows clear signs of having a mental disorder according to Millon and DSM-IV,[1] (2) discuss to what degree Victor Frankenstein perceives the creature as an echo of himself, which not only reflects his mental disorder, but also a fear of the unnatural, (3) discuss the likelihood that Mary Shelley had a personal experience with a narcissist, and thus had a more profound knowledge of narcissism than what she could have derived from the literature, and (4) suggest that Mary Shelley has contributed greatly to the myth of the ‘Mad Scientist’, and to the myth that anthropoeia[2] will never succeed when its maker has a weak and corrupt character such as a vain desire to create a grandiose double of himself.

Born in the romantic era by highly educated and politically influential parents, Mary Shelley (1797–1851) had a first hand knowledge of the intellectual and aesthetic currents of her time when she wrote ‘Frankenstein; or, The Modern Prometheus’. Her father, William Godwin (1756–1836), was one of the first exponents of English utilitarianism, and active in the earliest anarchist movements. Her mother, Mary Wollstonecraft (1759–1797), had been a philosopher and an eager advocate of women’s rights.[3] 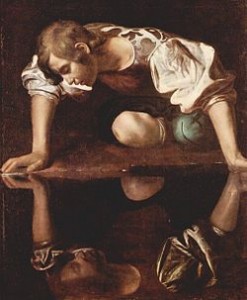 At the age of 17, Mary Godwin began a romantic relationship with Percy Bysshe Shelley (1792–1822), a poet and political follower of William Godwin. Unfortunately, Percy was already married, and the resulting scandal and renouncement of the young couple by their families made them leave England and travel through Europe for some months.[4]

In 1816, the ‘year without a summer’, Mary and Percy spend the dark and rainy days in Switzerland, with, among others, Percy’s friend Lord Byron[5] (1788–1824) who was a leading figure of the romantic movement. The company agreed to write stories of the supernatural,[6] and after two weeks of thinking, talking and dreaming about horrific things, Mary Shelley came up with preliminary ideas that subsequently led to ‘Frankenstein; or, The Modern Prometheus’. The novel was published in 1818 anonymously, and later re-published in 1823 under her name.[7]

Despite the notion of Mary Shelley being inspired by a romantic archetype of the Shadow or the Prometheus,[8] Mary painted an astonishingly accurate picture of a pathological narcissist in Victor Frankenstein. Surprisingly few literary critics have pointed out this pervasive personality trait in the novel’s protagonist,[9] which might, at least in part, be due to the fact that narcissism and its corresponding pathological description was developed some hundred years later by Sigmund Freud.[10]

In the light of modern psychiatry[11]+[i] ‘Frankenstein’ is a sad tragedy portraying a narcissist at full blast, a total disaster destroying his own being and the people around him in an obsessive and delirious pursuit of divine power. Indeed, ‘Frankenstein’ is richly furnished with descriptions of incidents that expose Victor Frankenstein’s mental condition.

Right from the beginning of Frankenstein’s narrative we are witnessing the grandiose and unrealistic sense of superiority in a man who expects complete submissiveness from his peers and his family. In his earliest childhood recollection Frankenstein’s sense of self importance and special status was already present: “I was their plaything and their idol,” and “the innocent and helpless creature bestowed on them by Heaven, whom to bring up to good.” [12] His wife-to-be Elizabeth is also introduced, her nature and qualities being described as no less than divine in order to complement Frankenstein’s ego: “The moulding of her face so expressive […] that none could behold her without looking on her as of a distinct species, a being heaven-sent, and bearing a celestial stamp in all her features.”[13] However, Elizabeth is never really allowed to be his equal as there can be only one superior, and thus he subjects her by telling that “till death she was to be [his] only.”[14]  Apart from his family Frankenstein has only one friend, the “tender” and “noble spirited” Henry Clerval,[15] as Frankenstein believes himself to be “totally unfitted for the company of strangers.”[16] Frankenstein shields himself from painful experiences of unexpected criticism by surrounding himself with unquestioning, gentle and loving people, the “old familiar faces,” who nourish his grandiose ego.

Later in life Frankenstein attends university. During his studies he is drawn to old-fashioned alchemy and natural philosophy, with a special interest in physiology and the structure of the human frame.[17] These particular studies ignite Frankenstein’s smouldering zest for godlike power, as he one day imagines himself creating life from lifeless matter; indeed, “what had been the study and desire of the wisest men since the creation of the world was now within my grasp.”[18] From here on Frankenstein endlessly pursues his goal for years ”with unrelaxed and breathless eagerness”,[19] disregarding his caring and concerning family in the meantime even though he knows that his year long silence disquiets them.[20] Frankenstein’s grandiose delirium and disturbed nature becomes more and more pronounced as he closes in on his goal:”No one can conceive the variety of feelings which bore me onwards, like a hurricane, in the first enthusiasm of success. […] A new species would bless me as its creator and source; many happy and excellent natures would owe their beings to me”[21], and thus he creates a living being, unfortunately however, in the shape of a very ugly creature.[22]

The narcissist’s ultimate nightmare is to have his fallibilities revealed, because this will disrupt his self-image and protection against his painful unconscious.[23] It is of no surprise then, that we see Victor Frankenstein’s narcissism most starkly exposed shortly after he has succeeded in creating a being that turns out to be imperfect. He runs away abandoning any responsibility,[24] and starts vehemently to suppress its existence.[25] Instead of behaving like a truly responsible scientist with an inquiring mind and a calm methodology, Frankenstein does exactly the opposite: He reacts like a spoiled child scared of a toy he was just perfectly happy to play with, and becomes sick and depressed like a hysterical patient who needs to be taken care of by Henry Clerval.[26]

Seen from a narcissist’s perspective, this reaction is understandable: Frankenstein is confronted with a far from perfect version of himself. Faced with his ugly shadow, a disfigured echo yelling distorted grunts to the hidden depths of his narcissistic psyche, he unfolds the typical defence mechanisms of a narcissist ego in danger. He becomes a denialist, desperately rationalizing his responsibilities away,[27] and allows death and disaster to poison his family and friend in the shape of an abandoned creature who is doomed to live in eternal loneliness and isolation.[28]

Things could have been different, though. Like all true romantic novels, an innocent and unspoiled being is not cruel in its natural state. As the creature starts to tell its own story about how it learns the ways of life the reader realises that it is like a ‘noble savage’;[29] innocent, good and free from the corrupting influence of civilization, having no other desires than to love and be loved.[30] Only when faced with its fate the creature turns vindictive and wicked. As Percy Shelley notes in his introduction to Mary Shelley’s ‘Frankenstein’; “the destructive consequences of withheld love can only be revenge and wickedness.”[31]

At work is a dyadic transfer: Victor Frankenstein calls the inanimate body “beautiful” up until the point where it opens its eyes and looks “wicked”.[32] But the creature is beautiful on the inside, only carrying a bit of bad craftsmanship on the outer shell. Frankenstein’s inability to comprehend this suggests that the creature might be more human than its creator. In fact, all that was admirable and noble in Frankenstein can be seen as transferred to the creature.

Of course the creature is misunderstood by the outside world. The centuries old fear about the treacherous, Faustian nature of anthropoeia[33] – of the creation of artificial people – is the true cause of the unravelling tragedy, and not the creature as such. Among scholars this is called a naturalistic fallacy; an erroneous belief in the equivalence of the unnatural and evil, the artificial and imperfect, the ugly and wicked.[34]

Only through the reflecting lens of education and civil norms the creature eventually learns to see itself the same way as others do: “Increase of knowledge only discovered to me more clearly what a wretched outcast I was. I cherished hope, it is true, but it vanished when I beheld my person reflected in water or my shadow in the moonshine, even as that frail image and that inconstant shade.” Now the creature only dares to look at itself in the moonshine at night, ashamed of being unnatural and ugly. It has annexed the prevailing beauty ideal by hating its ugliness. It has become naturalized to the fear of the unnatural.

End of part 1 of this essay. Part 2 also avaliable on this site.

[2] Sometimes spelled ‘anthropopœia’, from Greek, meaning the making of a human being.

[3] In: Mary Shelley (1818/1831/1992). Frankenstein. Penguin Classics, London, xiv. (As supplement to excerpts from Frankenstein stated in the syllabus. All references in this thesis will be made to the Penguin edition of Frankenstein)

[i] The unconscious belief of being worthless and inferior is the core problem of the narcissist, and in order to cope with the painful feelings of guilt and shame, the narcissist creates an image of himself as a superior being. According to Millon and the DSM-IV the narcissist first and foremost has a grandiose sense of self-importance that is prevalent from childhood, and it is from this belief that the narcissist sees and acts upon his world. The narcissist is obsessively preoccupied with self-generated fantasies of godlike power, mastermind intelligence, unparalleled success and the like, and thus sees himself as a shining star entitled to inexhaustible admiration. Imbued with excessive zeal and over-confidence, the narcissist pursues his fantasies working tirelessly towards the realization of his glory, while viewing other people as indifferent or instruments to serve as a means to an end, whatever the cost. The egocentric, exploitive and unempathic behaviour stems from an unwillingness to recognize the feelings and welfare of others, and to justify his actions and inconsiderateness, the narcissist rationalizes ad nauseam, to excuse his behaviour. Significant others are seen by narcissist as an extension of his self, and thus their qualities are idealized and elevated to divine proportions, to match the narcissist ego. Confronted with criticism, the narcissist will display a haughty, dismissive or even aggressive attitude, accompanied by denigration of the criticizer. Profound depressions often accompany a narcissistic disorder. In this phase the narcissist will isolate himself from the external world, and sink into dejection and deep despair. Ruminating in this state, his self esteem lowers to a point where it culminates in an expectation of punishment. In: Millon et al., Personality Disorders in Modern Life, 330-369.

Bibliography follows in part 2 of this essay, also published on this site.