The room is dense with hot humid air and tense emotions, and apart from twelve arguing men, a large wooden table is the only object in the room: This is the setting in which the main part of the 1957 American film 12 Angry Men takes place, and a setting of which the film is highly notable. 12 Angry Men tells the story of a jury made up of twelve men deliberating the guilt or acquittal of a defendant who is faced with death sentence in case of a ‘guilty’ verdict. Immediately the story seems simple in action but below the surface an intense psychological drama takes place. 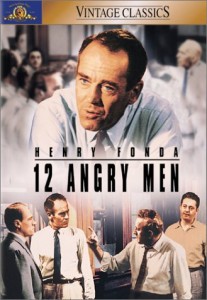 12 Angry Men opens with a court scene in which a jury, comprising twelve men, is being instructed by a judge: The men are to decide whether the defendant, a young boy from the slum, is guilty of stabbing his father to death. Their verdict must be unanimous, and in the event they find the accused guilty, death sentence is mandatory.  With these instructions and the final closing arguments in mind, the jurors recede to the jury room, and after a brief episode where the men get acquainted, it becomes apparent that they are already convinced that the defendant is guilty, and intend to end the hearing by voting without further discussion. However, in the preliminary vote one of the jurors, an architect played by a young Henry Fonda, votes ‘not guilty’: He wants to, at least, talk about the case before making a judgment because he thinks too much is at stake, that is, the life of a young boy. Subsequently, several of the other jurors become annoyed with him as they had hoped to end the case quickly and move on with life.

From here the story exclusively centers on how the men interact and influence each other as they deliberate on the case, and as a result of the interaction a number of psychological group processes develop: Influence of norms and need to belong , as well as dynamics of personal prejudice, are being introduced in the events taking place around the preliminary vote in the second scene of the film . In this scene, several of the jurors do not question the evidence, but readily assume that the young boy is guilty because of his social background, and especially one juror, a business man and troubled father, stands out as being particularly stubborn, opinionated and aggressive, and appears to be the strongest opponent to the idea of examining the evidence. Consequently, the prejudiced jurors influence the other jurors who feel that disagreeing would be going against the norms of the group.

In the face of antagonists and group pressure, the lone dissenting architect juror refuses to give in. Instead he faces the opponents with a calm and reasonable attitude, and by meticulous questioning the details of the evidence he challenges the stand of the group: Thus, like a true Lady Justice the architect juror stands out as an example of bravery, impartiality and fairness. And so, one by one the jurors realize that the evidence is flawed, despite their first assumptions, and the stand of the group subsequently reverses in favor of the young boy – with one exception: The aggressive business man juror, who, in spite of the questionable evidence, refuses to realize his argumentative shortcomings, and instead becomes agitated and hostile.

Here the story reaches its climax, and the architect juror suddenly realizes the reason why the business man juror has been acting offensive, and ‘like a self appointed public avenger’  all along: He is tortured by the memory of his son, who broke away from his rules, and consequently, they have not seen each other for two years. However, instead of facing his unfortunate personal circumstances, the business man juror seeks a personal vendetta redeemed with the death of the accused boy. A short argument between the men then follows until the business man juror breaks down in tears, and tears up a picture of him and his son: And finally, the verdict is now unanimous, and so, the story ends.

Although 12 Angry Men has been criticized of the somewhat unorthodox depiction of the examination methods used by the jurors to examine the evidence materials, the film has become part of many university curricula today ,  as an outstanding example of justice and democracy, human fallibility and the importance of debate. In 2007, the Library of Congress selected 12 Angry Men for preservation in the National Film Registry, as being ‘culturally, historically, or aesthetically significant.’