This is not a Balance discussion, its a design discussion.

A good game involves unit diversity and a give and take of tactics employed (i.e. “you do X, then I do Y”). 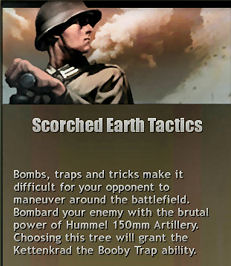 The US-Wehr matchup has this to a far larger degree than the US-PE matchup. Just one example: The Mg42 will instapin you, but you can flank it. Therefore, there is a give and take of tactics employed. (e.g. “you point it west, I come from the north”.)

A bad game, on the contrary, rewards players for just spamming the same unit, and gives one player abilities which the other player cannot do anything to avoid or counter. (e.g. G43 instapin – no matter what those rifles are just pinned).

Therefore, a good game involves interaction between players. In a way, its sort of like sex.
And by contrast, a bad game is one where players are rewarded for focusing on their own units. In a way, its more like masterbation.

Here are some of the badly designed abilites of the Panzer Elite:

– G43 Instapin
“Woops – guess those Rifles will have to retreat now.”
Is there anything you can do to prevent it? No. No way to flank it, no way to avoid it.
The PE player decides single-handedly what will happen here. The US player is reduced to an onlooker, especially in the early game where they only have a few units.

– Booby Traps
“Thought you were playing a tactics game? Oh no, you’re playing a puzzle game.”
Booby Traps are random, and you have to be extremely careful when capping points. I want to be extremely careful while fighting the enemy, not while capping desolate and abandoned points.
Booby traps are like an army, all by themselves. The PE player plants them, and then the US will have to deal with them. A far more intelligent way to have designed Booby Traps would have been to make them infer some penalty to the capping unit, but deal no damage in their own right. For example, Booby Traps could have suppressed the capping unit without dealing damage by itself. If this design had been employed, then the PE player would have to use his units in conjunction with Booby Traps, rather than just spamming them as a sort of Warcraft 3 Creeps in Company of Heroes.

– Sector Arty’s First Shell
“Everyone knows that Snipers are cool, right? Well, now you have Sniper Arty. What could be cooler?”
This has already been debated by players more skilled than I. The first shot hits with little to no warning and is extremely lethal and precise. Unlike other Arty, you don’t really get time to avoid it. Again, badly designed.

– Ket Push + Cap Reset
“It seems you like capping points. Here, let me make some more white points for you to cap.”
While Ket Push is fine, Push-and-Cap-Reset,-then-drive-away, is just retarded, because, again, there is nothing that the US player can do to prevent it.

– Scout Car lockdown within their own base.
Maps like Angoville and Semois were simply not designed for Scout Cars. As if the Flakvierling Base Defense’s increased range wasn’t enough, on Angoville the PE player can lock down his cut off points entirely, and again, there is nothing the US player can do to prevent or counter this in the early game.

This may also explain the tendency of the PE players to rage and taunt over the chat when the game goes poorly for them after the 9 minute mark: They jerk off violently, causing their member to aquire a crimson shade in the process. They lay themselves bare in public, enraged that it doesn’t even result in an orgasm.