Goering: “Nobody knows the real Goering. I am a man of many parts.”

[Asked if he believed in the term ‘master race’:]
Goering: “It is my view that if you are a master you have no need to emphasize it.” 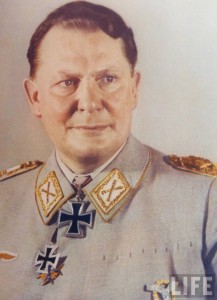 Goering: “After the United States gobbled up California and half of Mexico … territorial expansion suddenly [became] a crime.”

Leon Goldensohn: “Goering did not seem much interested in … details.”

Richard Overy: “Goering appeared at times to be all things to all men.”

Goering: “There is hardly any politically minded man who acknowledges and agrees with every point of the program of a political party.”

Goering: “I would be able to defend my actions, no matter what [evidence] they had on me.”

Goering: “Naturally, the common people don’t want war [but] the people can always be brought to the bidding of the leaders. That is easy. All you have to do is tell them they are being attacked and denounce the pacifists for lack of patriotism and exposing the country to danger. It works the same way in any country.”

Goering: “The political structure in different countries has different origins, different developments. Something which suits one country extremely well would perhaps fail completely in another. Germany, through the long centuries of monarchy, has always had a leadership principle. … The position of the Catholic Church rests now, as before, on the clear leadership principle of its hierarchy. And I think I can also say that of Russia, too.”

Goering: “I live the life of the last Renaissance man.” 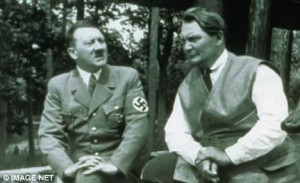 [Asked about his seizure of art from the Nazi occupied territories:]
Goering: “It wasn’t that I amassed it with aims of selling it and becoming a rich man. My personality demanded that I be surrounded by the best examples of the world’s art.”

[Responding to the rumors that he had set fire to the German Parliament:]
Goering: “I should be competing with Nero.”

[American interrogator: “How would you build the German Air Force if you had to start again from scratch?”]
Goering: “With jet aircraft and a bomber that could reach America.”

[Suicide note, explaining why he took a cyanide capsule to avoid hanging:]
Goering: “I would have let you shoot me without further ado! But it is not possible to hang the German Reichsmarschall! I cannot permit this. … I have no moral obligation to submit to the justice of my enemies. I have therefore chosen the manner of death of the great Hannibal.”

Richard Overy: “Goering was a contradictory [and] complex … character.”

Richard Overy: “Goering displayed a public face: Blunt, direct [and] jovial. … Goering appeared at times to be all things to all men.”

Richard Overy: “Goering’s ideas betray a consistent desire to create something essentially new, implying all the historic virtues, but unlike [anything] of the past.”

Richard Overy: “Many of the political jokes that circulated in the Third Reich were directed at Goering. He collected them [all] in a large leather notebook and delighted in re-telling most of them to his friends.”

Richard Overy: “[He was] a mercurial Luftwaffe commander [who] also loved the opera.”

Richard Overy: “Goering got into endless arguments with other officers [and] he did not like routine work.”

[On a formal inspection of the V2 rocket program, which Goering visited as head for the air force:]
General Dornberger: “[On this occasion he wore] soft Morocco leather riding-boots of glaring red with silver spurs … a very voluminous greatcoat of Australian opossum fur with the hide turned outwards. Platinum rings with big rubies.”