– Author has read all the major authors on Parmenides
– Author has good critical thinking skills and is critical of the previous authors
– Author has read big names like Derrida and Heidegger, recaps their thinking, disagrees and provides good arguments
– Book is clearly written (in a clear and simple style)
– Author interprets Parmenides as an ontologist/existentialist, rather than the “super-logician” that so many others have wanted to make him (e.g. Daniel W. Graham)
– Book includes a technical translation of Parmenides with philological notes at the back 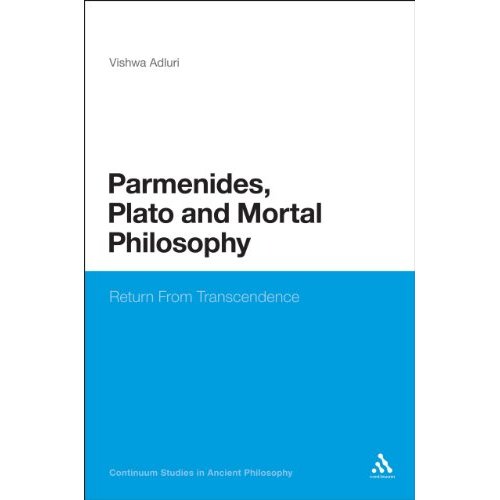 – Author’s interpretation of Parmenides is original, but questionable
(His Thesis: The youth is shown how the logic of the goddess, being general and impersonal, affords only an immortal view of the universe. But humans are mortals and must die. Therefore the doxa is the youth’s attempt to reassert his dignity and individuality as a mortal being, whose nature is specific, individualist, and limited in time. This makes Parmenides into a proto-Sartre and this reading is HIGHLY questionable, relying on multiple sleights of hand to even begin to bear the semblance of truth.)
– Author relies, in places, on a very close reading of the poem, yet as detailed in Parmenides Venerable and Awesome, this is a foolhardy endevour: The original papyrus has been lost, the poem was copied again and again and that was under the very poor standards of scholarship that existed in antiquity. Relying on specific words and sentence structures to extract meaning from Parmenides is therefore a bad idea. One should instead rely on the overall picture of the genuine fragments.

– After having set forth his thesis of Parmenides’ poem, as described above, the author then launches into an exposition of Plato’s dialogues. Here the author posits that Plato (more or less knowingly) reiterated the same themes in his Socratic dialogues that Parmenides did in his own poem some 80 years earlier. We know that Plato was acquainted with Parmenides’ philosophy, but to say that Plato’s purpose in writing his dialogues was but to re-hash this HIGHLY speculative and unlikely reading of Parmenides crosses the boundary between making reasonable inferences on the basis of a text and then granting oneself complete artistic license. To do fiction writing in the realm of non-fiction, so to speak.

Thus, according to this book, Plato did not write the Apology of Socrates and associated pieces in order to come to terms with the death of his beloved mentor, or to gleefully hint at his unwritten doctrine. He did it to show us that Socrates is mortal and to help us come to terms with our own mortality as human beings. Now I am all for wild and idiosyncratic readings, but they have to make AT LEAST as good sense of the facts as the old theories if one is to take them seriously, and not just see them as the author’s own existential striving, disguised as research.

I do not think that the author succeeds in making good sense of the facts surrounding the Platonic dialogues. For example, if the purpose of Plato’s writings is to show us how Socrates is mortal and must reassert his own dignity as mortal, rather than “remain in the realm of the goddess” and play pretend-immortal, then why is Socrates portrayed as a god-like figure in many of the Platonic dialogues? The author’s argument goes out on a limb while failing to make sense of the basest of facts!

The section on Plato feels artificial and out of context, as if plastered onto the back of the book, rather than reading like an integral part of the book itself. The work would have been stronger if this last section had been omitted.