There is, to my knowledge, no book in the world of a similar theme and scope.
Eastern Greece and northwestern India had some form of contact, being same as the intellectual neighborhood, with modern Persia in between. later historiography has covered up these ties, or purposefully ignored them out of cultural reasons. “The west should be the west and the east should be the east.” – or so they thought. 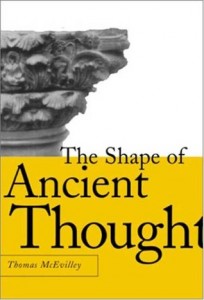 The book kicks off with a strong start, but gets bogged down around page 250. The task of writing this book is hard as the author can only present fragments from Greek and Indian texts, compare them, and then ask the reader to believe his analysis. He cannot prove anything, which is one reason why the book ended up being 800 pages long. In absence of direct proof, a load of examples are thought to convince the reader that this can be no coincidence. (But still, it could. in the absence of a specific academic tradition, how many primitive bronze age thoughts are there to be thought up? Maybe the overlap is not so astounding, after all.)

McEvilley is not the ONLY person in the world to ever have posited such a thesis of contact between east and west, but he is to my knowledge the first and only person to do such a complete study.

Still, modern scholars like to knock his work. in part because it is so speculative, but also in part because McEvilley pursues the most speculative parts of Greek philosophy that he can. He connects the dots of the Xenophanes fragments in order to form a complete philosophy out of them. He offers a re-interpretation of Plato that deviates from the standard modern one, and then, on the basis of his reading of Plato, proceeds to reconstruct Plato’s unwritten doctrine(!).

Of course, this is not what one expects of mainstream scholarship today, and so in a sense one can’t help but understand why modern scholars knock this work. But on the other hand, I can’t help but feel that if this book had been written in the 19th century, it would not have been regarded as unacademic fringe speculation, but as “one of the great classical works” on ancient thought.

And if nothing else, that should teach us something about how constricted modern scholarship has become.