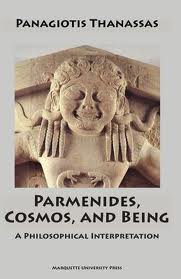 The first 20 pages or so just recap Parmenides as an intro for beginners: “There is a poem; this much is lost; many people considered it important in antiquity; we don’t know much about Parmenides’ life, etc. etc.” This made me think that the book was going to be a letdown. But after page 20, the pace picks up and the author offers some interesting interpretations on Parmenides.

The author is neither a Heideggerian nor an analytical philosopher (but he is probably closer to Heidegger’s meaning of the poem than any Anglo-American writer). He rejects Popper’s reading of Parmenides as postulating the universe as a motionless, homogenous block “where nothing can ever happen” and the author has a definite taste in Parmenides literature – i.e. he is not afraid to point out that some writers on Parmenides suck and others do not. (Strangely, though, he does not appear to reject Patricia Curd’s dilettantish reading of Parmenides.)

The book is only about 88 pages without the notes and translation of the poem. And seeing as how the first 20 pages are just a general intro that you probably already know if you know about Parmenides, you are in reality paying for 66 pages of Parmenides interpretation that is good without being shocking or amazing. For this reason, I feel that the list price of the book should have been cut in half (from £12 to £6).

That said, here are some interesting points from the book:

I would certainly recommend this book over ‘Parmenides Venerable and Awesome‘ and also over ‘Parmenides, Plato and Mortal Philosophy‘, but a better study of comparable length is, I think, is Martin J. Henn’s ‘Parmenides of Elea‘.