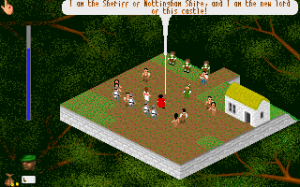 This game is based on the extremely popular Adventures of Robin Hood. However, for those of you who are unfamiliar with the history of this spectacular archer and bandit, here’s the story in a nutshell:

1. Get kicked out of your castle by the Sheriff of Nottingham.
2. Assemble a band of merry men.
3. Gain popularity by robbing from the rich and giving to the poor.
4. Be declared an outlaw.
5. Woo Maid Marian.
6. Take back the castle, ruin/kill the Sheriff, hoorah.
7. No, this game is not based on any of the movies (especially not the one starring Kevin Costner).

Robin Hood starts with an amusing little intro in which Robin is stripped of his castle. You take control of the sulking (no really, it’s quite funny) Robin outside the gates. This gives the impression that Robin is not the most together or competent individual, despite what the stories say. Your job is to lead Robin on his quest to regain his castle. You don’t so much control Robin directly as click on where/what you want him to do, and he does so, sometimes not quite the way you wanted him to. Rescuing Will Scarlet, for example, involves shooting his captors with your bow. Save your game before you fire, as you’re just as likely to shoot Will instead of the guard… Erm, sorry, Will. This is mildly irritating, but actually goes along well with the feel of the rest of the game.