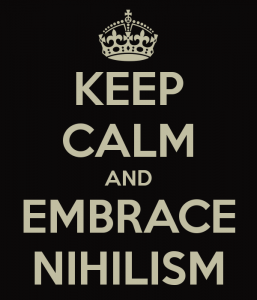 The main tenor of Western philosophy, from Descartes onward, basically leads to some form of value nihilism. This statement may seem astounding.

On the earliest fringes of European philosophy you have names like Pythagoras, Parmenides, and Heraclitus – these people were as much mystics as they were ‘philosophers.’ Then you get Socrates, as basically just another Zeno of Elea. Plato lays the groundwork of later rationalism, by his rigorous and arid analysis of words and concepts, and by postulating a purely intellectual cause that could not itself be affected by other causes (the Forms). Yet there is still something of a mystical or “integral” element in Plato.

(1) Matter becomes “dead” and soul alive. Even animals are basically just advanced clockwork to him. So from the earlier conception of the world as being alive or “enspirited,” the West tends to move towards a conception of matter as basically dead.

(2) Then there’s the rationalization of thought, meaning that thought becomes dislodged from anything in the real world, e.g. the famous dualism which is in contradiction to Parmenides and Plato where thought and the real are mutually interdependent.

These challenges have never really been refuted in Western philosophy. Although there are of course many theories of morals etc., they are really all quite impotent when compared to the case for value nihilism. Hume and Adam Smith recognized as much, saying that morals come out of our moral sentiments as a fact of human nature. But as should be obvious, if a species has a type of moral sentiment that has evolved in that species because it was beneficial to survival, that basically amounts to saying that *in reality* there is no morality, only an accident of evolution, which endows us with values and morals, and which we can attempt to formalize in different ways.

But as long as Western philosophy is conceived as mere analytical playthings for the mind, they ultimately amount to no more than a curtain strapped in front of a big empty stage to dress up the setting as being not just a void. But ultimately, since the is-ought dichotomy still stands, there is nothing that can go toe-to-toe with the challenge of nihilism and win.

In this way, Nietzsche actually had the right idea when he saw that (1) humans cannot be nihilists; it’s too psychologically self-destructive and (2) there is no rational escape from nihilism.

But Nietzsche then ended up championing dominance and aesthetics as the meaning of life, to fill the void of nihilism. It is easy to agree with his criticism of nihilism and its destructive effects, but on the other hand, also easy to disagree with his solution. This is where Indian philosophy comes in.

Whereas the whole Western tradition is built around dispassionate thoughts that are more or less dislodged from the real, Indian philosophy starts instead from the realization, or mystical vision, that is expressed in the Upanishads, or which was attained by the Buddha. This state seems to exist across cultures and across millennia, and brain scientists are working intensely on figuring out what it is. But, as the cliches go, there is a mode of perception where “all things are one,” opposites are realized as being two opposites of the same coin, and so on. This state is so intense as to negate all doubt and rumination. To the person who experiences it, it is self-evidently true without qualification. Famously, it is completely unlike ordinary thoughts and feelings, nothing like ordinary mental life.

In this state, there is no is-ought. That is just another dualism, which is exposed as an intellectual plaything in Indian philosophy. Basically, where Western philosophy postulates an Is-Ought divide, Indian philosophy postulates an Is-Seeming divide, where Is is the realization of reality as one and beyond dualisms and Seeming is our ordinary empirical consciousness which is full of dualisms all the time. In the Is-state, morality, in the form of compassion for all living beings, is said to follow by itself. Hence the problem of nihilism is solved by Indian philosophy; compassion for all sentient beings is synonymous with the truth.

The hard science reason for this compassion may be that intense meditation thickens the white/grey matter in the brain so that you naturally become more empathic and compassionate. But that doesn’t really matter in Indian philosophy: Whereas the West basically starts with thought in a naked vacuum (Descartes), the Indians start with the fact that there is a state of consciousness that is completely beyond ordinary mental life and which is experienced as self-evidently true. From the existence of this state, all of the rest of philosophy springs.

Now it might be interjected that this state could easily be a delusion, like someone on LSD realizing that things are one. Scientifically, it is true that the effects of meditation and psychedelia have been shown to have a bit in common (though psychedelia don’t strengthen the grey/white matter in the brain). So from a Western standpoint, the criticism is legitimate: The Indians are just tripping!

But if someone, like Nietzsche, felt the plight of nihilism knocking and saw that there really was no escape, the Indian approach represents an alternative way that, at least on its own premises, is practically irrefutable. In this way, philosophy becomes not just an intellectual discipline, but a spiritual one as well (though *not* religious as we understand it).