The republic was in many ways a multi-faceted political system that stretches back into an archaic, semi-mythological past. The exact lifespan of the Roman Republic is also a matter of dispute,  though most accounts stretch from the expulsion of the last Roman kings in 510 BCE. to ca. 49 BCE when Caesar crossed the Rubicon. 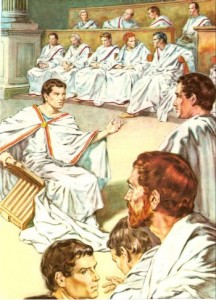 The Division of Powers

Briefly stated, the senate was nominally responsible for military and foreign policy, and for advising the executive political magistrates of the republic. However, the Senate could not legislate directly. This was the privilege of the people’s assemblies, along with that of electing political magistrates.

Finally the Republic’s elected magistrates were responsible for commanding the military (Imperium), appointing new senators, collecting taxes, arranging public entertainment and games, and so on. Upon this constitutional foundation, an intricate set of veto’s, checks and balances were in place all serving the purpose of limiting the accumulation of political power, thus securing the liberties of the Roman people.

In regards to the liberties enjoyed by the Roman citizens of antiquity we might note the individual’s right to enter legal contracts, right to fair trial and appeal, right to vote, right to migrate, and the right not be exposed to torture. These rights jointly embodied the republican virtue known as rule of law: A theme explicitly found in Cicero’s In Defense of Cluentius where it is argued, that is it through the existence of the law that Roman citizen can enjoy equality and liberty. As Cicero says: “We are all the slaves of the laws in order that we may be free.”.[iii]

It is of interest to us to note, that in regards to the division of powers under the Roman Republic, only the centurion assembly could declare war, a move later mirrored in the United States Constitution, which states, that only the House of Representatives can declare war.

In regards to later republicanists, the Roman military was chiefly an inspiration in the form it had prior to the Marian reforms in 107 BCE. Under this “archaic doctrine” members of the Roman citizen army had to possess a personal fortune of at least 3000 sesterces and to own and supply his own weapons and armour. As such, the citizen-soldiers under the archaic doctrine were mostly landowners.

The Marian reforms have traditionally been commended by military historians for dramatically bolstering Roman manpower but in regards to Republicanism, including the landless citizens in the army posed a domestic and political (rather than foreign and military thread) in that it was perceived that the landowners and those in possession of some fiscal strength would be uninterested in ever turning their arms on the state itself. As such, it is ironic that one of the most notable side effect of the Marian reforms was that the Legions eventually became loyal to their commanders rather than to the Roman state. These political complications are grist for the Republicanists’ mill and quite rightly so.

[i] Millar, Fergus: The Roman Republic in Political Thought pp. 66-79