Harrington, apparently a man of great learning, about whom not much is otherwise known, is responsible for one of the most defining voices of the republicanism of seventeenth century England. While they all acknowledge the Oceana to be an original work, scholars have called it both ‘tedious’ and ‘baroque’ and in as such it might be tempting to ignore Harrington’s thought. However, for the thinker interested in the republican tradition, Harrington cannot be ignored for not only does he rely heavily on the Roman Republic in his work, he had also certainly read Machiavelli’s Discourses, and Hobbes’ Leviathan.[i]

The First Principles of The Ocena 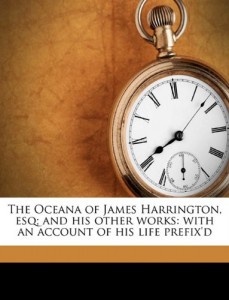 The primary pivot, around most of which the Oceana’s political philosophy reverts is that of the ownership of agrarian lands (a common thought until humanity finally escaped Malthus’ trap somewhere in the 19th century CE). In Harrington’s ideal republic, the agrarian lands are somewhat evenly distributed amongst a  non-hereditary gentry-aristocracy which should constitute the middle-class of the republic. As such, Harrington’s political vision is strangely idiosyncratic as Harrington casts aristocracy in the role of both the wealthy landowner that Machiavelli praised before him, and of the common-sensical Yeoman whom the founding fathers of America would praise after him.[ii] Whether such a mixture of psychological qualities is possible in the same person is, however, a good question and one that Harrington neglects to answer, giving his writings a heavily utopian character.

Never the less, as we have noted above, Harrington does draw upon the Roman Republican past, and in doing so Harrington asserts that a strong agrarian middle class is the best way of ensuring the political stability of a Republic and argues – somewhat bizarrely – that England should ensure the cultivation of Wales and Scotland in the same manner as the Roman eventually ensured the cultivation of all of Italy.[iii]

Likewise, in reading the Oceana, one is continuously struck by the paradoxical nature of Harrington’s thought. Thus he at once appears to be pitted very strongly against the ‘regal power’ (i.e. monarchical elements) of mixed government that Machiavelli and the Romans of antiquity had adhered to, yet on the other hand he is also mistrustful of the democratic elements of such an order. And so, Harrington appears to instate a compromise class in his gentry-aristocracy to form the middle class of his ideal republic. Yet this simply appears to beg the question: Why and how is Harrington a republicanist, rather than an oligarch endorsing some minor correctives to the oligarchy?

Harrington’s Legitimate Use of the Roman Past

In spite ofHarrington’s excentricities, however, it would be foolish of us to simply reject Harrington’s contribution to the political philosophy of republicanism as he – in spite of his many idiosyncrasies – also manages to draw upon the Roman past with a mixture of competent understanding and insightful originality. As such, Harrington seems to call for the establishment of a Senate-like political body of greater aristocrats to preside over the middle-class of gentry-aristocrats. Yet at the same time the Senate should not have legislative powers, and the gentry should have the privilege of electing two “Knights”; executive political magistrates who are to serve for three-year terms and who are able to plead and reason with the Senate on behold of the gentry-aristocratic middle-class.

In his fiscal elevation of the middle class (i.e. to the status of small aristocrats, at least in theory) Harrington simultaneously also manages to provide his republic with a well-trained citizen army of landowners a la Machiavelli; – one that he wishes to divide into soldiers fighting on foot and soldiers fighting from horseback, a la Rome. Thus the Roman Marian reforms which facilitated the transition of the Roman military from landowners, loyal to the existing political order, to professional soldiers, loyal to their immediate commanders; – these reforms are largely seen as something to avoid which is wholly in line with sound republican thinking. Importantly, Harrington’s ideas regarding the armed classes and their loyalties were to play a crucial role in the education and later political deliberation of America’s founding fathers, particularly with regards to the thought of Thomas Jefferson.[v]

Another point where Harrington would exert great influence over America’s founding fathers was in his distrust of direct democracy. Harrington posits, that his ideal republic is too large for the people to effectively assemble like the Romans did (and which in fact even the Roman republic was), but even this congent argument cannot hide Harrington’s generally disfavourable attitude towards the direct exertion of power by the people.[vi] Harrington’s solution is straightforward: It is for the people to elect sound-minded representatives to handle their political affairs for them.

Thus, while Harrington remains a bizarre figure in the history of republican thought, he was at the time time an important precursor for some of the most important ideas of the American Revolution.

[i] Millar, Fergus: The Roman Republic in Political Thought pp. 86-89