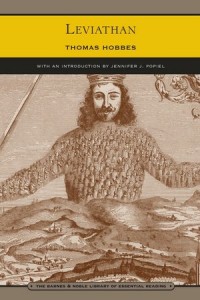 Leviathan. While this work is considered central to any discussion of European political philosophy. Hobbes occupied a very notable role in seventeenth-century England, in that he contrasted with many of his contemporaries who were more favourably inclined towards republicanism.

The central tenet of Leviathan, is well-known: As the natural state of man is to be as a wolf towards his fellow man [homo homini lupus est / bellum omnium contra omnes], this necessitates a state ruled by a universally recognized sovereign. Only through this Leviathan-king’s complete political power and sovereignty can man’s individual liberties be guaranteed and preserved.[i]

In a sense, this argument can be regarded as an early version of the Social Contract, a thought that was the subject of much scrutiny from the continental political philosophers of early-modern Europe, and which Machiavelli had implicitly rejected. Throughout the period, varying stances towards this social contract were developed and defined, though they need not concern us overmuch here. What is important is rather that, given Hobbes’ argument that individual liberties can only be guaranteed by the sovereign, all forms of rebellion or political dissent opposing the universal authority of the sovereign, and by extent also opposing the social contract of the sovereign is seen as undesirable.[ii] We note here, the complete disagreement with Machiavelli and his progenies who stressed the importance of disconcert within the state as a prerequisite for political dynamism and innovation.[iii]

In reading the Leviathan it is interesting that one finds no explicit means by which Hobbes would ensure the  political dynamism and innovation of Machiavelli. Hobbes’ solution to the problem of how to rule may render stability, but his state will soon fossilize, like that of the Roman Empire in the first and second centuries CE.

In other words, the Leviathan-state aims to achieve and provide security for man against his fellow man, peace from the bellum omnium contra omnes. But peace at the cost of a centralized and inviolatable authority will lead to stagnation, says Machiavelli.

Hobbes’ Concept of Liberty is too Narrow

So the Leviathan is concerned first and foremost with stability and only then with the dynamics of civil life within the state. Perhaps that is also why the Leviathan defines Liberty rather narrowly; both in relation to other political philosophies, contemporary and otherwise, but also narrow in relation to the earlier works of Hobbes himself. The concept of liberty in Leviathan is almost narrowed down to mean the freedom, or non-restriction of physical movement and motion.[iv]

Another interesting difference, is that were Machiavelli saw his political theory as a continuation of the Roman Republican tradition, and based himself on the annals of the Roman historian Livy, Hobbes argued that too much value had been placed on the political precedents found in the chronicles of Greece and Rome:

“In these Western parts of the world, we are made to receive our opinions concerning institution, and rights of commonwealths, from Arisotle, Cicero and other men, Greeks and Romans, that living under popular states, derived those rights, not from the principles of nature, but transcribed them into their books, out of practice of their own commonwealths which were popular… And so Aristotle, so Cicero, and other writers have grounded their civil doctrine, on the opinions of the Romans who were taught to hate monarchy, at first, by them that having deposed their sovereign, shared amongst them the sovereignty of Rome; and afterwards by their successors. And by reading of these Greek and Latin authors, men from their childhood have gotten a habit (under a false show of liberty,) of favouring tumults, and of licentious controlling the actions of their sovereigns; and again; and again of controlling these controllers; with the effusion of so much blood; as I think I may truly say, there was never any thing so dearly bought, as these western parts have bought the learning of the Greek and Latin tongues.”[v]

So Hobbes is saying that his philosophy is a doctrine that is more adequately equipped to protect man from his own bestial nature (“…not from the principles of nature…”). And so Hobbes turns away from earlier conceptions of Liberty – from Antiquity as well as from the Renaissance – and also turns away from Liberty as it was concieved by his contemporaries (“under a false show of liberty”). And finally, Hobbes stresses political stability and individual security over the political dynamism of Machiavelli (“…with the effusion of so much blood”). 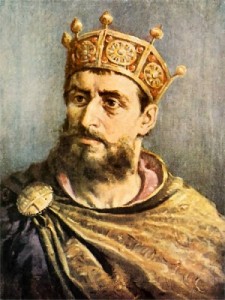 The conclusion is that Hobbes is actually encouraging his contemporary political philosophers to shun away from the precedents set by Greece and Rome, amongst other things because the notion of classical Antiquity that it is acceptable to kill a tyrant is anathema to the idea of the inviolatable Leviathan-king. One could perhaps wonder why this break from tradition is not more expounded upon in general histories of political philosophy.

In fact, Hobbes is quite a proto-totalitarian: For he also advises us that looking at Liberty through the prism of Greek and Roman politics is to confuse the Liberty of the state with the Liberty of the individual.[vi] While Hobbes maintains that individual freedom is strongest when it is least threatened (i.e. guaranteed by a universally recognized sovereign), other republicanists, such as Machiavelli, protest, that even if such a sovereign was to provide perfect political liberty of justice to his subjects, it would never the less only be possible to be free in a state where one has the possibility of participating in the political process.[vii] What such republicanists posit, in other words, is that it is only possible to be free in a free state.[viii]

In conclusion, Hobbes calls for a state that leaves the citizen with no political avenues open to him. From a republican or liberal point of view, this is grave, and especially so if the citizen should happen to differ with his monarch in the perseverance and execution of his civil liberties. Furthermore, being subordinated and bound to the will of another, the citizen of the Leviathan state stands in stark contrast to both the vigourous, public persona of Machiavelli’s homo republicus as well as to the self-trusting, self-owning Yeoman that was Thomas Jefferson’s later ideal and in many ways formed the basis of revolutionary American thought.