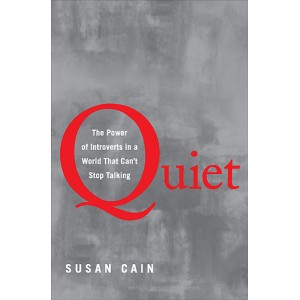 Susan Cain now has 500+ reviews of her book on “introversion.” Seems she really hit the jackpot and has made quite the sum from it. But the book is problematic, to say the least.
Its really more about stress management and (hyper)sensitivity than it is about introversion. Which is kind of weird as she claims to have researched introversion for seven years. She also engages in the “E vs. I” game, implying that extroverts caused the financial crisis (!) (!!) (!!!) (!!!!!!)

Then, some of the “research” that she reports in the book she reports is wrong (introverts are afraid of giving presentations -> No!) and at other times, the research is overplayed/construed and “interpreted” in a different direction than what the sources actually said.

Basically, my take is that she is high in neuroticism and hypersensitive. She then writes about how introversion equals shyness and sensitivity for 300 pages. As several people have remarked, she is not even likely to be an introvert herself, which is probably the reason that her understanding is so poor.

The thought presents itself that books such as this one is not really about E/I at all, but about giving people who, for various reasons, feel bad about themselves a cushion; a narrative for themselves where they are reassured that they are secretly better than others.

I will say that the book was nicely written, though.