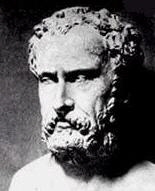 Should Xenophanes be read as a monist or a monotheist? It seems that the surviving fragments of his thought can lend itself to either interpretation, with but a few modifications. And the ancient sources are also mixed on this matter. Thus we are faced with a doxographical split with some writers believing that Xenophanes was a monist in the Eleatic tradition along with Parmenides and Zeno and others beliveing that Xenophanes was a monotheist, writing in a religious tradition.

* Plato’s support for this interpretation may not have been intended as serious by Plato. It may have been a “jesting” remark, as Barnes calls it.

On the other hand, the writers who interpret Xenophanes as a monotheist are: Hippolytus.

And finally, we have the sources which lend themselves to either interpretation: Simplicius, Cicero, Pseudo-Galen, the Melissus, Xenophanes, Gorgias, Jonathan Barnes, M. Schofield

Our view here, as inspired by Thomas McEvilley, is that Xenophanes’ thought presents a religious version of a philosophical monism and so that he is not a monotheist in the Judeo-Christian-Islamic sense of the term, but who identifies the oneness and totality of philosophical monism with the divine, not unlike what Spinoza would later do.