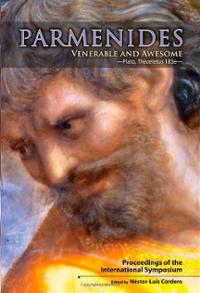 Insofar as this book is meant to show us new directions in Parmenides studies, it must be said to fail. It re-hashes over-analytical word games and new spins on old interpretations. In fact, if one had read The Pre-Socratics: A Collection of Critical Essays, a similar volume which was edited by Alexander P. D. Mourelatos in 1974(!), but not this volume, then one would not have missed much.

One of the best essays of this volume is Giovanni Casertano’s Parmenides – Scholar of Nature which attempts an Aristotelian reading of Parmenides. The essay ends up being successful not because Parmenides is some proto-Aristotelian – he is not – but because the essay effectively highlights the differences between Parmenides and the Aristotelian (empirical) mode of thinking.

Many of the other essays offer nothing. Others again are quite close to what I believe to be Parmenides’ general meaning, but again, apart from  Casertano’s Aristotelian reading, there is no reading or interpretation of Parmenides in this volume that was not available in some form or another in the 1970s.

Some other reviewers of this book have criticized the publisher for claiming that the book is suitable for specialists and non-specialists alike. Though, while non-specialists who know all the basics of Greek philosophy should certainly be able to read it, one wonders why they would. There is a lot of academic ‘inside baseball’ here that is not even relevant to an academically-minded person with an interest in Ancient Greece, but which is mostly relevant to academics who need to know each others’ positions on various purely bibliographical issues that only concern Parmenides’ philosophy indirectly.

Perhaps for the same reason, a lot of the essays in this book read like they are speaking to each other, rather than to the reader. In other words, the chapters could have used further editing, and a great deal of the tangential material could have been axed or relegated to the notes. As it stands, there is simply too much ‘dead weight’ in this book and too far between the interesting tidbits.

Still, the raison d’être for the book is that it collects all the main talks and essays that were presented at the international Parmenides symposium in 2007, and the talks do include many of the major “names” in Parmenides scholarship. As such, even though the book fails to deliver new insights, it is itself of the aforementioned bibliographical importance insofar as it documents the state of mainstream Parmenides research anno 2007 to posterity, even if it brings nothing new to the table.

The volume would probably be a very hard sell in any case. That the publisher has deemed it worthwhile to bring this volume to the market is to be much commended.