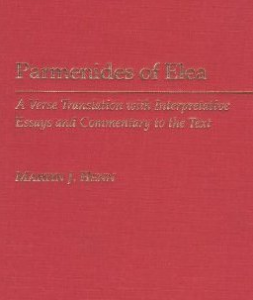 Though this volume was published in 2003, its influence on the field of Parmenides studies has been negligible.

It was, for instance, not mentioned at all at the international Parmenides symposium in 2007 and nor was it mentioned in the recent ‘Parmenides, Plato and Mortal Philosophy‘ by Vishwa Adluri which otherwise purports to give an overview of the major opinions in Parmenides research. Overall, this omission seems strange.

The book opens with a linguistic analysis of Parmenides as a poet in the Homeric oral tradition. This section is bound to chiefly interest scholars of Ancient Greek rather than philosophers who are merely out to glean Parmenides’ philosophical meaning. The book also takes care to attempt to place the themes of Parmenides (fire and night) in a Greek tradition that must have been influenced by the Persian Zoroastrian tradition to some degree. As the author points out, the Zoroastrian tradition was already centuries old when the Greeks started poking around in it.

Though the author isn’t blind to the spiritual and archetypical content of philosophical themes like fire and night, he nevertheless takes care to put his points analytically and rationally to the reader. Like others have done before and after him, Henn takes pains to point out how Parmenides was influenced not just by Zoroastrian and nascent shamanism, but also by Orphism as well. In the case of Empedocles it is quite evident and generally acknowledged that he was as much a charlatan, magician, and wonder-worker as he was a philosopher, but for some reason, modern scholars keep assuming that Parmenides must be a ‘pure’ philosopher or logician. (Daniel W. Graham is one example of such a scholar. Patricia Curd is another.) But in fact, we are told quite plainly by Simplicius (in Diels 31 A7) that Empedocles was an associate and imitator of Parmenides. So there is good reason to assume that Parmenides may have had some of these histrionic tendencies as well.

Some further points from the book:

While few full-fledged Parmenides scholars will be bound to accept all of these points wholesale, all of them are original and argued in a way that is satisfying to read and engage with. So much scholarship on the Pre-Socratics is presented in the format “so-and-so is so because I say it is so.” – A form of “argument” that is very frustrating for the critical mind to read. Not so with Martin J. Henn: He offers his conjectures, but he knows that he should aim to convince us, rather than just declaring so-and-so to be true. (A style or argument that is often considered pre-Parmenidian – the irony is palatable when our subject matter is considered.)

Why this book has been so overlooked is and must be a source of wonder to anyone interested in Parmenides research. Perhaps one reason is that its author, Martin J. Henn, is no one in particular: He was an adjunct professor of classics in Kansas when this book was written and it appears that Henn has now left the academic world entirely. Yet if this is indeed the case, Henn’s absence and the lack of further books from his pen on the subject, must truly be considered a loss for the field of Pre-Socratic studies as a whole.

How the academic world has gotten itself into a corner where authors who have nothing but unoriginal re-hashings to offer are promoted to central (and much coveted) positions of scholarship while original authors like Martin J. Henn are resigned to an auxiliary position at a Kansas State University is a mystery that would interest all of the humanities. Hopefully, it will one day be taken up with the same ardor as this author has exhibited in trying to crack the code of Parmenides’ poem.