In May 2017, one of Denmark’s leading feminists, Emma Holten, took the stage to speak about feminism. In her talk, she said:

Now Holten is not just a feminist. She is, as she herself says, a “very, very left-wing,” 4th-wave feminist beholden to intersectional theory. In this quote, she showcases one of the cornerstones of intersectional theory: Namely that if two groups are marginalized or oppressed, they should come together in their quest for increased social justice and the endeavor to speak truth to power. In theory, this sounds nice. But in practice, it leads to some absurd conclusions. 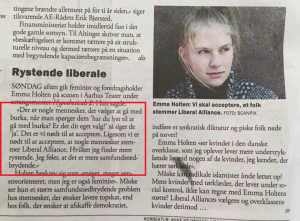 Like here, where people who want lower taxes are perceived as more of a threat to feminism than people who want to dismantle democracy, establish a theocratic dictatorship, and flog adulterous women in the town square.

The issue here is bigger than just Denmark. It can be seen in the dynamics of most of Western Europe – and with a few modifications, the same dynamics can be seen in the United States as well. Before intersectional theory became mainstream, the left had already made it their cause to defend the values and practices of Muslim migrants to Europe. However, as the problems with Muslim communities have escalated, the moderate center-left has largely abandoned their former apologetic stance on Muslim values.

This means that this sympathy is now almost exclusively the stance of the far left – the same far left where intersectional theory reigns.

To put it simply, the intersectional far left views Muslim migrants as a strategic ally in their fight against the right wing. That is, after all, the cornerstone of intersectional theory, so it would be pretty surprising if they did not.

But an interesting thing about this is, if you’re a feminist, shouldn’t you care about the rights and lots of women? From one report after another, we know that Muslim women in Europe are subjected to massive social control from their fathers, husbands, and sons. For example, a young girl who went partying with her friends without the veil was seen by a male cousin of hers, and once word got back to her family, she was severely punished.

But in the intersectional universe, all that is needed is to ask these people directly whether they’re wearing the veil out of their own free will or not. In other words, there is a pretty grave lack of interest in the actual dynamics of Muslim communities among the intersectional feminists. The veil is almost reduced to a fashion choice that doesn’t really mean anything to anyone.

So in fact, far from championing the perspectives of women, or upholding their basic freedoms, many intersectional feminists actually reduce the plight of Muslim women to a side show and refuse to view Muslims as active subjects – instead they view them as passive victims or objects who are acted upon by the right wing without any personal agency of their own. This is the only way in which Muslims can fit into the white, middle-class, far-left intersectional perspective. If the feminists applied a centrist liberal feminist view to the oppression of these women, there would be no basis for a grand alliance between the Muslims and the far left.

This is also why many leading figures among the intersectionalists get so angry when someone points to the massive social problems that reign in Muslim communities. For example, the American progressive political activist Linda Sarsour, who was also co-chairwoman of the Day Without a Woman protest, reacted to criticisms of Islam by the Arab Christian Brigitte Gabriel and the Somali-born activist Ayaan Hirsi Ali by saying: “They are asking for an ass whipping. I wish I could take their vaginas away. They don’t deserve to be women.”

That’s right – the so-called progressive intersectional feminist and champion of the American far left says of a genital mutilation victim that she doesn’t deserve to have a vagina.

Examples can readily be multiplied. For example, if you watch our video ‘The Contradiction in Modern Feminism’ you can see how far-left feminists across most of Western Europe didn’t want to condemn the mass sexual attacks that Arab and North African men perpetrated against white women on New Year’s Eve in Cologne. To single out the sex attackers as the bad guys here would undermine the whole intersectional world view, and so all the intersectionalists were left with  were muddled explanations and whataboutery. “But if we criticize Muslim migrants for sexual assault, we’ll be agreeing with the right-wing!” or “But white men commit sex attacks too!”

In Denmark, the intersectional feminists have repeatedly denounced the voices from Muslim communities who speak out against the oppression of women that goes on within them. Often, they are called coconuts (i.e. brown on the outside, white on the inside), and they have even been called ‘house Muslims’ – a thinly veiled allusion to the pejorative House Nigger.

Emma Holten herself, whom we quoted at the start of this video, and who is, we say again, one of Denmark’s most prominent feminists and an internationally sought-after speaker on feminism and women’s rights, has actually defended the use of the term House Muslim. It has analytical value, as she says.

Muslims have to be passive victims who are exposed to racism by bigoted right-wingers, so that decent people who dislike racism will side with the far left. When Muslim women start speaking out against that narrative, they are undermining the intersectional world view and need to be shut up.

One final point about this: Holten said that women in Denmark wear the burka, but actually no Muslim migrants to Denmark wear the burka at all. What some of them do wear is the niqab, which is the Saudi full-facial covering veil. The mix-up reveals a comparative lack of interest in Muslim practices and the divisions that are predominant within Muslim communities. It corroborates what we have said about intersectional feminists not caring what Muslim women actually go through or think, but only about them having to fit with the pre-scripted narrative of far-leftists liberating Muslims from the racism and oppression of right-wingers.