Since the first appearance of cavalry around 1000 BC, mounted troops have fulfilled several important roles in battle. They acted as scouts, skirmishers, a shock force for mêlée combat, a rear guard, and the pursuit of a retreating enemy. Cavalry were divided into several different categories depending on equipment and training, and some categories were better suited for certain roles than others. Light cavalry wore little or no armor and was best suited for scouting, skirmishing, and acting as a rear guard. Heavy cavalry wore armor and was better suited for use as a shock force that charged the enemy. All types of cavalry excelled at pursuit. 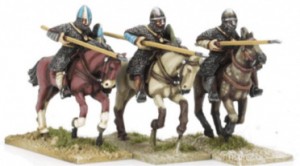 Knights of the Middle Ages were heavy cavalry, and the code of chivalry emphasized their role as shock troops charging enemy cavalry and infantry. From the thirteenth century on, the term man-at-arms was used to describe armored warriors fighting on horse and on foot. The new term applied to knights as well as squires, gentry, and professional soldiers.

The advantages of knights in battle were speed, intimidation, power, and height. As the Middle Ages progressed, the equipment of knights improved to enhance these advantages.

The spear, and later the larger lance, was the weapon with which cavalry opened a battle. It was ideal for stabbing opponents on foot, especially those in flight. The presentation of the spear in front of a mounted horseman added greatly to the intimidation caused by an approaching charge. Much of the force of the horse could be transmitted through the spear point at the moment of impact. The charging knight became a thundering missile.

Historians disagree on the importance of the stirrup to the rise of knights. The stirrup first appeared in Asia and reached Europe in the eighth century. Some believe that it was critical to the rise of knights because it allowed the rider to brace himself and his lance, thereby transmitting the entire force of the charging horse through the lance point. No one argues with the advantage of this force multiplication, but others suggest that the high saddle developed in Roman times allowed riders to transmit this power before the stirrup appeared. The Bayeux Tapestry, which depicts William’s conquest of England in 1066, shows the highly regarded Norman knights using their spears mainly as overhand stabbing or throwing spears, not as couched lances. By this time the stirrup had been known in Europe for at least two centuries. For the remainder of the Middle Ages, the mounted charge by knights holding couched lances was the epitome of combats for knights. It was not always the correct tactic, however.

The initial charge by knights often resulted in the loss of spears or lances, or the charge ended in a general mêlée. In either case, knights switched to another weapon. This was usually their sword. The cavalry sword evolved into the saber, a wide, heavy blade that a man standing in his stirrups could swing down with tremendous force on the head and upper body of opponents. Swords were the weapons that knights prized most highly because they could be carried on the person, prominently displayed, and personalized. They were the most common weapons for hand-to-hand combat between knights. Good swords were also expensive, so ownership was another distinction of the nobility.

Other choices of mêlée weapon included the hammer and mace (evolutions of the club), the axe, and the flail. Hammers and maces were popular with fighting churchmen and warrior monks trying to obey the letter of the Bible’s admonition about shedding blood, which edged weapons were prone to do.

Under no circumstances did knights use missile weapons of any kind. Killing an opponent at range with an arrow, bolt, or bullet was considered dishonorable. Knights fought worthy foes of the same rank when possible and killed face to face or not at all.

Chain mail armor was worn by the late Romans and by some of the invading Germanic tribes, including the Goths. Chain mail remained popular with the nobility of medieval Europe until more protective plate armor came into use in the thirteenth century. The change was made in part because an arrow or sharp sword point could pierce chain mail. A cloth tunic, called a surcoat, was worn over the chain mail, especially during the Crusades to reflect the sun.

Helmets also evolved from simple conical designs, to large metal buckets, to large sculpted pieces designed to deflect arrows. Later, helmets could be bolted to the armor worn on the body.

Full suits of armor weighing up to 60 pounds appeared in the fourteenth century. Plate armor was well designed and knights retained a surprising amount of agility. An armored knight on the ground was not helpless and could easily stand up. There are accounts and depictions of armored men doing handstands and other gymnastics in lighter moments. Later suits put increased emphasis on deflecting missiles and reinforced areas most exposed to blows. Elaborate full suits of engraved plate armor appeared late during the age and were more ceremonial and prestigious than practical.

Armor was a large expense for a knight who equipped himself and a squire. An important lord had to provide armor for many knights. The making of armor was an important business, and a large market in used armor developed during the Middle Ages. Common soldiers on the victorious side of a battle could make a substantial sum by stripping dead knights of their armor and selling it.

Knights took special pride in their horses, which were bred for speed and strength. They required extensive training, as well, to be manageable during a charge and mêlée. Horses were trained to charge with minimal guidance, freeing the knight to hold his shield and lance. Historians disagree as to whether the horses of knights were the heavy horse thought necessary to carry the weight of a fully equipped knight or a smaller horse valued for its speed and agility.

Horsemanship was another characteristic by which the elite knights distinguished themselves from the commoners. It was practiced while hunting, a popular leisure activity of the nobles that carries on today in the traditional foxhunt.